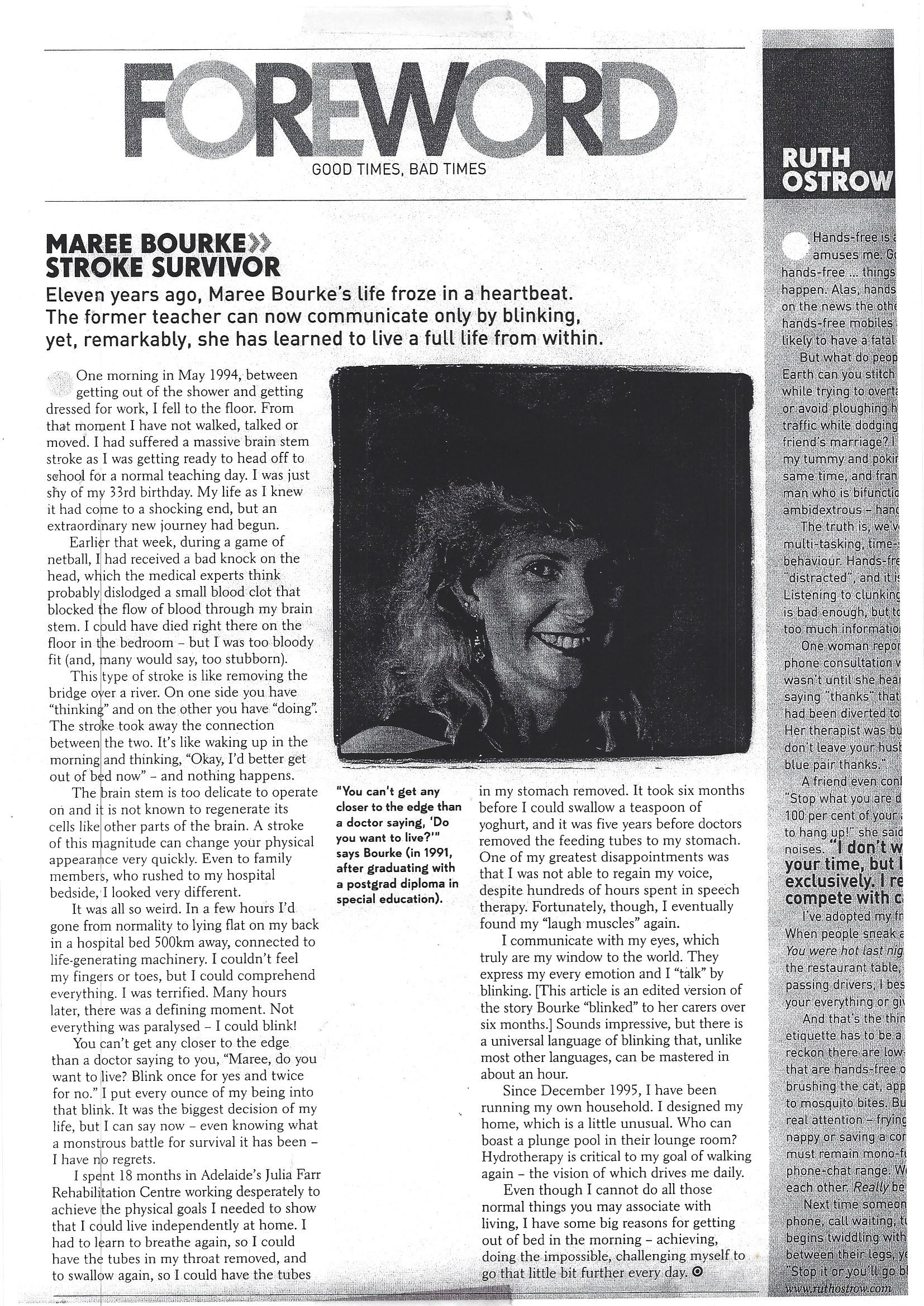 Eleven years ago, Maree Bourke’s life froze in a heartbeat. The former teacher can now communicate only by blinking, yet, remarkably, she has learned to live a full life from within.

One morning in May 1994, between getting out of the shower and getting dressed for work, I fell to the floor. From that moment I have not walked, talked or moved. I had suffered a massive brain stem stroke as I was getting ready to head off to school for a normal teaching day. I was just shy of my 33rd birthday. My life as I knew it had come to a shocking end, but an extraordinary new journey had begun.

Earlier that week, during a game of netball, I had received a bad knock on the head, which the medical experts think probably dislodged a small blood clot that blocked he flow of blood through my brain stem. I could have died right there on the floor in the bedroom – but I was too bloody fit (and, any would say, too stubborn).

This type of stroke is like removing the bridge o er a river. On one side you have “thinking and on the other you have “doing”. The stroke took away the connection between the two. It’s like waking up in the morning and thinking, “Okay, I’d better get out of bed now” – and nothing happens.

The rain stem is too delicate to operate on and i is not known to regenerate its cells like other parts of the brain. A stroke of this magnitude can change your physical appearance very quickly. Even to family members, who rushed to my hospital bedside, I looked very different.

It was all so weird. In a few hours I’d gone from normality to lying flat on my back in a hospital bed 500km away, connected to life-generating machinery. I couldn’t feel my fingers or toes, but I could comprehend everything. I was terrified. Many hours later, there was a defining moment. Not everything was paralysed – I could blink!

You can’t get any closer to the edge than a doctor saying to you, “Maree, do you want to live? Blink once for yes and twice for no.” I put every ounce of my being into that blink. It was the biggest decision of my life, but I can say now – even knowing what a monstrous battle for survival it has been -I have no regrets.

I spent 18 months in Adelaide’s Julia Farr Rehabilitation Centre working desperately to achieve the physical goals I needed to show that I could live independently at home. I had to learn to breathe again, so I could have the tubes in my throat removed, and to swallow again, so I could have the tubes in my stomach removed. It took six months before I could swallow a teaspoon of yoghurt, and it was five years before doctors removed the feeding tubes to my stomach. One of my greatest disappointments was that I was not able to regain my voice, despite hundreds of hours spent in speech therapy. Fortunately, though, I eventually found my “laugh muscles” again.

I communicate with my eyes, which truly are my window to the world. They express my every emotion and I “talk” by blinking. [This article is an edited version of the story Bourke “blinked” to her carers over six months.] Sounds impressive, but there is a universal language of blinking that, unlike most other languages, can be mastered in about an hour.

Since December 1995, I have been running my own household. I designed my home, which is a little unusual. Who can boast a plunge pool in their lounge room? Hydrotherapy is critical to my goal of walking again – the vision of which drives me daily.

Even though I cannot do all those normal things you may associate with living, I have some big reasons for getting out of bed in the morning – achieving, doing the impossible, challenging myself to go that little further every day.” 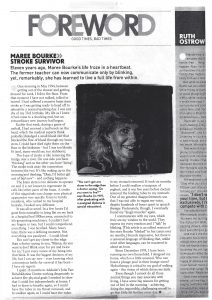