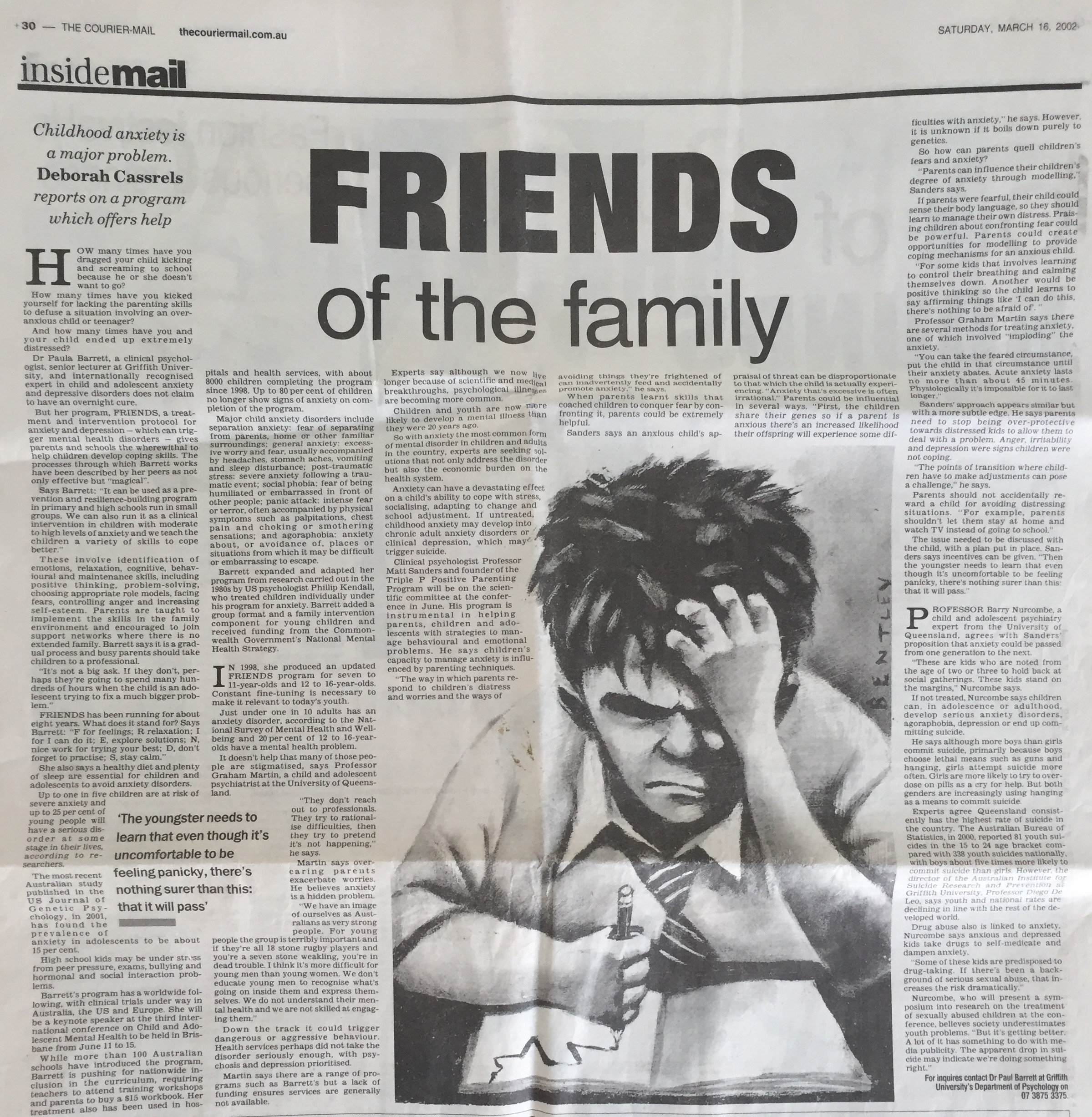 FRIENDS of the family

“HOW many times have you dragged your child kicking and screaming to school because he or she doesn’t want to go?

How many times have you kicked yourself for lacking the parenting skills to defuse a situation involving an over-anxious child or teenager?

And how many times have you and your child ended up extremely distressed?

Dr Paula Barrett, a clinical psychologist, senior lecturer at Griffith University. and internationally recognised expert in child and adolescent anxiety and depressive disorders does not claim to have an overnight cure.

But her program, FRIENDS. a treatment and intervention protocol for anxiety and depression — which can trigger mental health disorders — gives parents and schools the wherewithal to help children develop coping skills. The processes through which Barrett works have been described by her peers as not only effective but “magical”.

Says Barrett: “It can be used as a prevention and resilience-building program in primary and high schools run in small groups. We can also run it as a clinical intervention in children with moderate to high levels of anxiety and we teach the children a variety of skills to cope better.”

These involve identification of emotions, relaxation, cognitive, behavioural and maintenance skills, including positive thinking, problem-solving, choosing appropriate role models, facing fears, controlling anger and increasing self-esteem. Parents are taught to implement the skills in the family environment and encouraged to join support networks where there is no extended family. Barrett says it is a gradual process and busy parents should take children to a professional.

“It’s not a big ask. If they don’t, perhaps they’re going to spend many hundreds of hours when the child is an adolescent trying to fix a much bigger problem.”

FRIENDS has been running for about eight years. What does it stand for? Says Barrett: “F for feelings: R relaxation, I for I can do it: E. explore solutions: N, nice work for trying your best: D. don’t forget to practise; S. stay calm.”

She also says a healthy diet and plenty of sleep are essential for children and adolescents to avoid anxiety disorders.

Up to one in five children are at risk of severe anxiety and up to 25 per cent of young people will have a serious disorder at some stage in their lives, according to researchers.

The most recent Australian study published in the US Journal of Genetic Psychology, in 2001, has found the prevalence of anxiety in adolescents to be about 15 per cent.

High school kids may be under str,’ss from peer pressure, exams, bullying and hormonal and social interaction problems.

Barrett’s program has a worldwide following, with clinical trials under way in Australia. the US and Europe. She will be a keynote speaker at the third international conference on Child and Adolescent Mental Health to be held in Brisbane from June 11 to 15.

While more than 100 Australian schools have introduced the program, Barrett is pushing for nationwide inclusion in the curriculum, requiring teachers to attend training workshops and parents to buy a $15 workbook. Her treatment also has been used in hospitals and health services, with about 8000 children completing the program since 1998. Up to 80 per cent of children no longer show signs of anxiety on completion of the program.

Major child anxiety disorders include separation anxiety: fear of separating from parents, home or other familiar surroundings; general anxiety; excessive worry and tear, usually accompanied by headaches. stomach aches. vomiting and sleep disturbance; post-traumatic stress; severe anxiety following a traumatic event; social phobia; fear of being humiliated or embarrassed in front of other people; panic attack: intense fear or terror, often accompanied by physical symptoms such as palpitations, chest pain and choking or smothering sensations; and agoraphobia; anxiety about, or avoidance of, places or situations from which it may be difficult or embarrassing to escape.

Barrett expanded and adapted her program from research carried out in the 1980s by US psychologist Phillip Kendall, who treated children individually under his program for anxiety. Barrett added a group format and a family intervention component for young children and received funding from the Common-wealth Government’s National Mental Health Strategy.

In 1998, she produced an updated FRIENDS program for seven to 11-year-olds and 12 to 16-year-olds. Constant fine-tuning is necessary to make it relevant to today’s youth.

Just under one in 10 adults has an anxiety disorder, according to the National Survey of Mental Health and Well-being and 20 per cent of 12 to 16-year-olds have a mental health problem.

It doesn’t help that many of those people are stigmatised, says Professor Graham Martin, a child and adolescent psychiatrist at the University of Queensland.

“They don’t reach out to professionals. They try to rationalise difficulties, then they try to pretend it’s not happening,” he says.

“We have an image of ourselves as Australians as very strong people. For young people the group is terribly important and if they’re all 18 stone rugby players and you’re a seven stone weakling, you’re in dead trouble. I think it’s more difficult for young men than young women. We don’t educate young men to recognise what’s going on inside them and express themselves. We do not understand their mental health and we are not skilled at engaging them.”

Down the track it could trigger dangerous or aggressive behaviour. Health services perhaps did not take the disorder seriously enough, with psychosis and depression prioritised.

Martin says there are a range of pro-grams such as Barrett’s but a lack of funding ensures services are generally not available.

Experts say although we now live longer because of scientific and medical breakthroughs, psychological illnesses are becoming more common.

Children and youth are now more likely to develop a mental illness than they were 20 years ago.

So with anxiety the most common for, of mental disorder in children and adults in the country, experts are seeking solutions that not only address the disorder but also the economic burden on the health system.

Anxiety can have a devastating effect on a child’s ability to cope with stress, socialising, adapting to change and school adjustment. If untreated, childhood anxiety may develop into chronic adult anxiety disorders or clinical depression. which may trigger suicide.

Clinical psychologist Professor Matt Sanders and founder of the Triple P Positive Parenting Program will be on the scientific committee at the conference in June. His program is instrumental in helping parents, children and adolescents with strategies to manage behavioural and emotional problems. He says children’s capacity to manage anxiety is influenced by parenting techniques.

‘The way in which parents respond to children’s distress and worries and the ways of avoiding things they’re frightened of can inadvertently feed and accidentally promote anxiety,” he says.

When parents learnt skills that coached children to conquer fear by confronting it, parents could be extremely helpful.

Sanders says an anxious child’s appraisal of threat can be disproportionate to that which the child is actually experiencing. “Anxiety that’s excessive is often irrational.” Parents could be influential in several ways. “First, the children share their genes so if a parent is anxious there’s an increased likelihood their offspring will experience some difficulties with anxiety,” he says. However, it is unknown if it boils down purely to genetics.

So how can parents quell children’s fears and anxiety?

“Parents can influence their children’s degree of anxiety through modelling,” Sanders says.

If parents were fearful, their child could sense their body language, no they should learn to manage their own distress. Praising children about confronting fear could be powerful. Parents could create opportunities for modelling to provide coping mechanisms for an anxious child

“For some kids that involves learning to control their breathing and calming themselves down. Another would be positive thinking so the child learns to say affirming things like ‘I can do this, there’s nothing to be afraid of’.”

Professor Graham Martin says there are several methods for treating anxiety, one of which involved “imploding” the anxiety.

“You can take the feared circumstance, put the child in that circumstance until their anxiety abates. Acute anxiety lasts no more than about 45 minutes. Physiologically it’s impossible for it to last longer.”

Sanders’ approach appears similar but with a more subtle edge. He says parents need to stop being over-protective towards distressed kids to allow them to deal with a problem. Anger, irritability and depression were signs children were not coping.

“The points of transition where children have to make adjustments can pose a challenge,” he says.

Parents should not accidentally reward a child for avoiding distressing situations. “For example. parents shouldn’t let them stay at home and watch TV instead of going to school.”

The issue needed to be discussed with the child, with a plan put in place. Sanders says incentives can be given. “Then the youngster needs to learn that even though it’s uncomfortable to be feeling panicky, there’s nothing surer than this: that it will pass.

PROFESSOR Barry Nurcombe, a child and adolescent psychiatry expert from the University of Queensland, agrees with Sanders’ proposition that anxiet- could be passed from one generation to the next.

“These are kids who are noted from the age of two or three to hold back at social gatherings. These kids stand on the margins,” Nurcombe says.

If not treated, Nurcombe says children can in adolescence or adulthood. develop serious anxiety disorders, agoraphobia, depression or end up committing suicide.

He says although more boys than girls commit suicide, primarily because boys choose lethal means such as guns and hanging, girls attempt suicide more often. Girls are more likely to try to overdose on pills as a cry for help. But both genders are increasingly using hanging as a means to commit suicide.

Experts agree Queensland consistently has the highest rate of suicide in the country. The Australian Bureau of Statistics, in 2000, reported 81 youth suicides in the 15 to 24 age bracket compared with 338 youth suicides nationally, with boys about five tunes more likely to commit suicide than girls. However, the director of the Australian Institute for Suicide Research and Prevention at Griffith University, Professor Diego De Leo, says youth and national rates are declining in line with the rest of the developed world.

“Some of these kids are predisposed to drug-taking. If there’s been a background of serious sexual abuse. that in-creases the risk dramatically.”

Nurcombe, who will present a symposium into research on the treatment of sexually abused children at the conference. believes society underestimates youth problems “But it’s getting better. A lot of it has something to do with media publicity. The apparent drop in suicide may indicate we’re doing something right.” ” 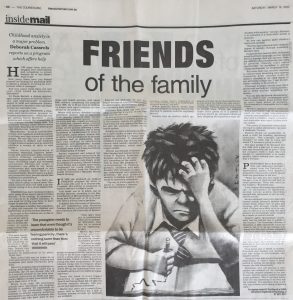