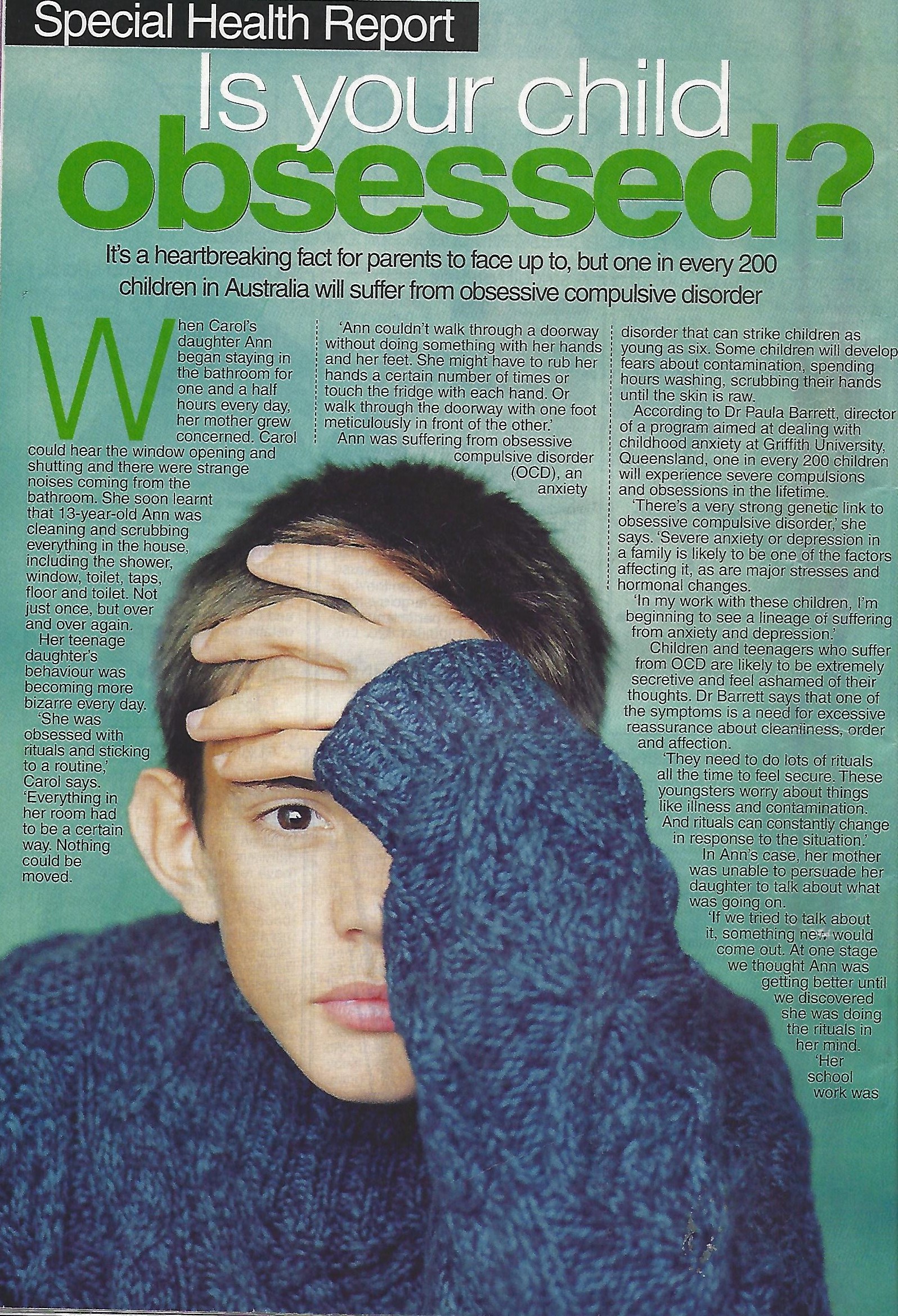 Is your child obsessed?

“It’s a heartbreaking fact for parents to face up to, but one in every 200 children in Australia will suffer from obsessive compulsive disorder.

When Carol’s daughter Ann began sting in the bathroom for one and half hours every day, her mother grew concerned. Carol could hear the window opening and shutting and there were strange noises coming from the bathroom. She soon learn that 13-year-old Ann was cleaning and scrubbing everything in the house, including the shower, window, toilet, taps, floor and toilet. Not just once, but over and over again.

Her teenage daughter’s behaviour was becoming more bizarre every day.

‘She was obsessed with rituals and sticking to a routine,’ Carol says.’Everything in her room had to be a certain way. Nothing could be moved.

‘Ann couldn’t walk through a doorway without doing something with her hands and her feet. She might have to rub her hands a certain number of times or touch the fridge with each hand. Or walk through the doorway with one foot meticulously in front of the other.’

Ann was suffering from obsessive compulsive disorder (OCD), an anxiety disorder that can strike children as young as six. Some children will develop fears about contamination, spending hours washing, scrubbing their hands until the skin is raw.

According to Dr Paula Barrett, director of a program aimed at dealing with childhood anxiety at Griffith University, Queensland, one in every 200 children will experience severe compulsions and obsessions in the lifetime.

‘There’s a very strong genetic link to obsessive compulsive disorder,’ she says. ‘Severe anxiety or depression in a family is likely to be one of the factors affecting it, as are major stresses and hormonal changes.

‘In my work with these children, I’m beginning to see a lineage of suffering from anxiety and depression’.

Children and teenagers who suffer from OCD are likely to be extremely secretive and feel ashamed of their thoughts. Dr Barrett says that one of the symptoms is a need for excessive reassurance about cleanliness, order and affection.

‘They need to do lots of ritual all the time to feel secure. These youngsters worry about things like illness and contamination. And rituals can constantly change in response to the situation.’

In Ann’s case er mother was unable to persuade her daughter about what was going on.

‘If we tried to talk about it, something new would come out. At one stage we thought Ann was getting better until we discovered she was doing the rituals in her mind. ‘Her school work was affected,’ Carol recalls. ‘Her teachers told me that if Ann typed something on her computer and made a mistake, she would have to start all over again, right from the beginning. She was unable to delete anything.’

The family became very distressed about it, but Ann bluntly refused to go to a doctor with her mother.

Finally, after a family trip to see her grandparents interstate Ann did realise and was wilting to acknowledge that something was wrong. On her return, Carol booked them both into the program at Griffith University.

‘Within 14 weeks therapy (CBT) she was a different child — a happy, normal girl who enjoyed life.’

Ann’s major difficulties stemmed from a close friendship at school, one which was causing her serious anxiety as she was totally unable to deal with a bullying friend.

Lara Healy, a psychologist from Griffith University who works in the program, says the typical onset of OCD is around 10-12 years old.

‘In younger years it seems to affect more boys than girls,’ she says. ‘Once they get into adolescence, more girls seem to be affected.

‘The triggers seem to be stressful life events. It may be the loss of a pet, or that the child has been very sick, even hospitalised — or perhaps if the home has been burgled.

‘If OCD is left untreated, it tends to become a chronic condition that waxes and wanes,’ she points out.

With treatment, youngsters are able to identify what’s going on and get it under control. Lara explains: ‘We use a technique known as cognitive behavioural therapy (CBT) which focuses on the child’s thoughts, feelings and behaviours. We teach them to respond to threatening situations in a more rational way.

‘We teach them how they can control their feelings and thoughts, as well as how to approach situations without their rituals or engaging in avoidance. Our results indicate 80 per cent of our young patients have a significant reduction in their symptoms.'” 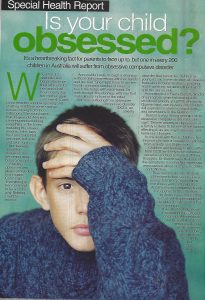 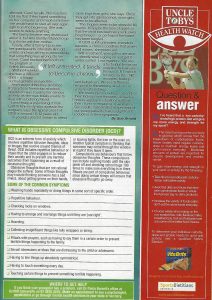