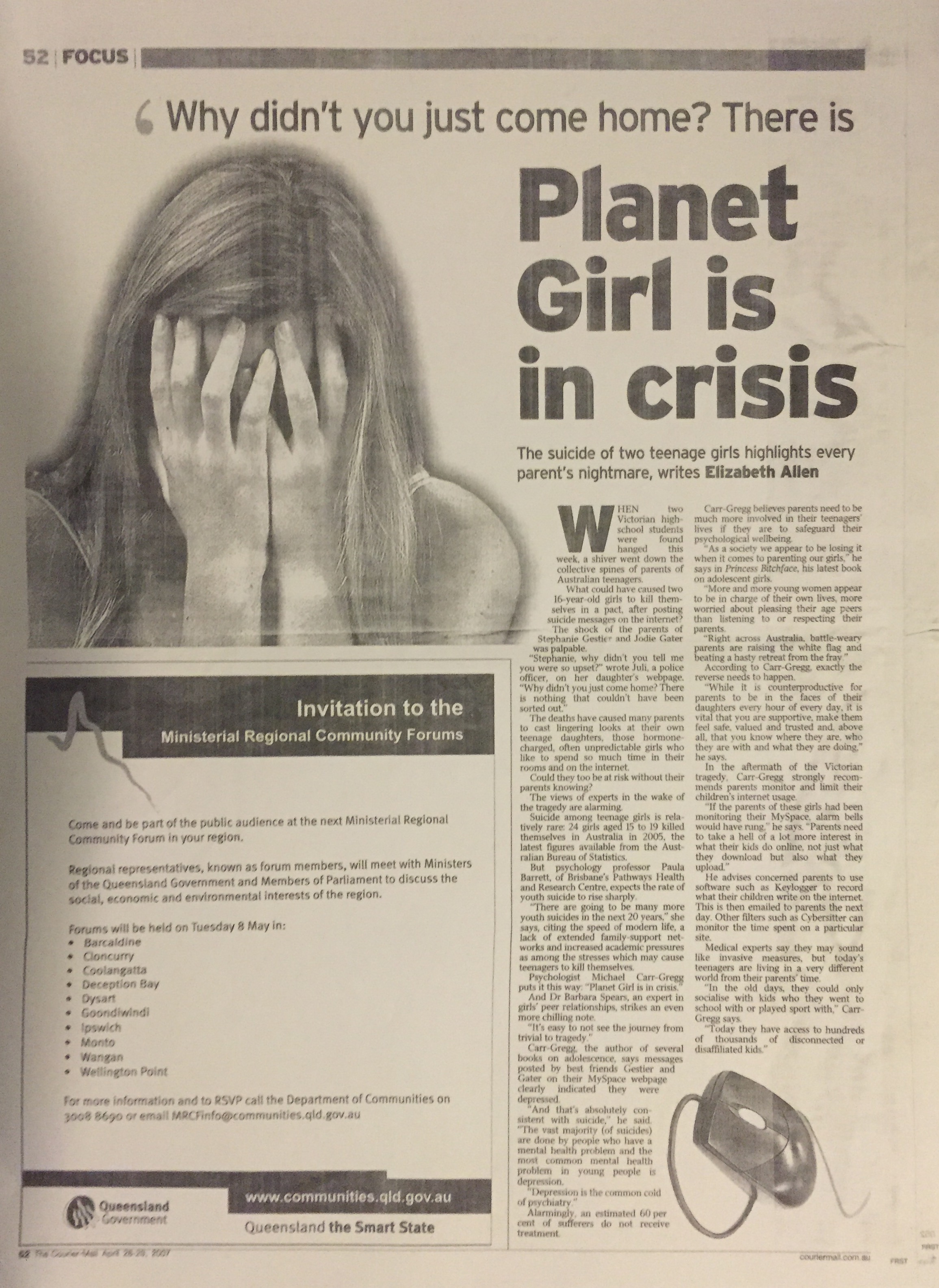 WHEN two Victorian high school students were found hanged this week, a shiver went clown the collective spines of parent, of Australian teenagers.

What could have caused two 16 year old girl, to kill themselves in as pact, after posting suicide messages on the internet?

The shock of the parents of Stephanie Gestler and Jodie Gater was palpable.

“Stephanie, why didn’t you tell me you were so upset?” wrote Jolt, a police officer, on her daughter’s webpage. “Why didn’t you just come home? There is nothing that couldn’t have been sorted out.”

The deaths have caused many parents to cast lingering looks at their own teenage daughters, those hormone-charged, often unpredictable girls who like to spend so much time in their rooms and on the internet.

Could they too be at risk without their parents knowing?

The views of expert, in the wake of the tragedy are alarming.

Suicide among teenage girls is relatively rare: 24 girls aged 15 to 19 killed themselves in Australia in 2005, the latest figures available from the Australian Bureau Of Statistics.

“There are going to be many more youth suicides in the next 20 years.” she says, citing the speed of modern life, a tat k of extended family-support networks and increased academic pressures as among the stresses which may cause teenagers to kill themselves.

Psychologist Michael Carr-Gregg puts it this way. “Planet Girl is in crisis.”

And Dr Barbara Spears, an expert in girls’ peer relationships, strike an even more chilling note.

“It’s easy o not see the journey from trivial to tragedy”.

Carr-Gregg, the author of several books on adolescence, says messages posted by best friends Gestler and Gater on their MySpace webpage clearly indicated they were depressed.

“Depression is the common cold of psychiatry”.

Alarmingly, an estimated 60 percent of sufferers do not receive treatment.

Carr-Gregg believes parents need to be much more involved in their teenagers lives if they are to safeguard their psychological wellbeing.

“As a society we appear to he losing it when it comes to parenting our girls, he says in Princess Bitchface, his latest book on adolescent girls.

“More and more young women appear to he in charge of their own lives, more worried about pleasing their age peers than listening to or respecting their parents.

“Right across Australia. battle-weary parents are raising the white flag and beating a hasty retreat from the fray.”

According to Carr-Gregg. exactly the reverse needs to happen.

“While it is counterproductive for parents to be in the faces of their daughters every hour of every day, it is vital that you are supportive, make them feel safe, valued and trusted and, above all, that you know where they are, who they are with and what they are doing.” he says.

In the aftermath of the Victorian tragedy, Carr-Gregg strongly recommends parents monitor and limit their children’s Internet usage.

“If the parents of these girls had been monitoring their MySpace. alarm bells would have rung,” he says. “Parents need to take a hell of a lot more interest in what their kids do online, not just what they download but also what the upload.”

He advises concerned parents to use software such as Keylogger to record what their children write on the Internet. This is then emailed to parents the next day. Other filters such as Cybersitter can monitor the time spent on a particular site.

Medical experts say they may sound like invasive measures, but today’s teenagers are living in a very different world from their parents’ time.

“In the old days, they could only socialise with kids who they went to school with or played sport with,” Carr-Gregg says.

“Today they have access to hundreds of thousands of disconnected or disaffiliated kids.”

The result can be a virus of negative thoughts. Carr-Gregg advises families to draw up a family Internet contract A government site. netalert.net.au, can help parents with this by spelling out what is appropriate online behaviour.

He also advises limits on internet time, citing cases of patients who spend 15 hours a day playing one internet game.

“They are obese morbidly depressed and lasing their lives in cyberspace.” he says. He wants parents to take the lead in encouraging their children to lead balanced lives. “They need a healthy diet sport, dance, art… but what’s happening is that a lot of them are coming home and disappearing behind this firewall called MySpace and MSN.

“It’s a digital divide. But kids won’t build a bridge hack. Parents base to he proactive.”

He says it is “most likely there was a depression element present” in the suicide of the Victorian teenagers.

Coot says depression can present in different ways at different ages: “In young people, they have a lot more irritability and quickness to anger. When you are older you know the sun will come up tomorrow and that problems have solutions. But young people can think there’s no tomorrow.”

Cook advises parents to talk to their child and “maintain a relationship”. “That’s difficult with some 16-year-olds but it’s a lifelong commitment,” he says.

Teenagers should also be aware help is available, “If there’s a strained relationship with a parent approach a teacher, a church person, a netball coach. Seek professional help.”

Dr Barbara Spears, a senior lecturer in education at the University of South Australia. believes one of the big issues in understanding girls is how to separate the drama queens from the real girls at risk.

Spears says parents who operate in an authoritative — not authoritarian — way have better relationships with their children. “They set boundaries but the kids have freedom within those boundaries,” she says. “They can make choices within those constraints.”

In contrast, authoritarian parents give no freedom and laissez-faire parents do not give enough care.

However, psychologist and academic Dr Barrett does not agree with Spears that the path to suicide can be quick. “Usually when kids get to this point there’s been a history of difficulty, whether it’s three months or many months.” she says.

“You don’t go from totally happy to committing suicide.”

With one in five young people either very anxious or depressed, Barrett wants to see society building social and emotional skills in children from a young age.

Barrett’s Friends program, which promotes resilience in primary and high-school students, has been adopted by the World Health Organisation as best-practice.

The program, run by the Pathways centre at Brisbane’s West End, is used in schools in Canada, New Zealand. Greece, Finland, Norway, Britain and some Queensland private schools, but not in Queensland state schools.

Barrett says if all young children were taught social and emotional skills, they would be alert if someone was in trouble.

“If someone was having a particularly bad time, everyone around them would be alert to the warning signs.” she says.

“It would be like a community safety net to catch the child.”

Barrett advises parents to be vigilant for signs of distress.

“Sometimes parents think their teenagers are just revolting and if they ignore them it will go away,” she says.

“But parents should have it checked out. Give them a chance to talk to someone professionally.”

“After the initial barrier of 15 minutes of sulking, they will talk.

“Once you crack that harrier, then you realise this person is so desperate for someone to help them.”

SOCIAL campaigner and World Vision head the Reverend Tim Costello has warned of the dangers of the impact of a “toxic culture” on young girls.

Commenting after the suicide deaths of two 16-year-olds in Melbourne earlier this week. Costello told an audience of girls and parents at St Aidan’s Anglican girls school that society places too much emphasis on how girls look.

“There is no doubt there are toxic forces at work in our culture which impact on girls,” he said.

“There’s pressure about how they look, about what brands they wear and the assumption is if they get those things they’ll be happy. That ‘s not true.”

Costello said it was important parents and girls realised they would have had days.

“But we all need to realise that black feelings are not final.

“They are always a transition phase.

“The trouble is, when you put those black feelings into MySpace it has a finality about it that can be lethal.

“That’s the difference these days. The precipice seems closer, and the risks greater.”

Watching for the signs of trouble

PSYCHOLOGIST Paula Barrett says signs of depression in teenagers can include excessive worry and sleep disturbance.

“They either go to bed early and can’t sleep because they are worried or they have early rooming insomnia.” she warns.

“They wake up feeling really bad about themselves and feel hopelessness and helplessness.”

“They start withdrawing and not relating to anyone. spending a lot of time in their room and/or with one special friend, They can form pacts.

“Usually they can’t concentrate at school and lose interest in everything that used to make them happy. They are irritable all the time; everything gets on their nerves. They frequently get physically sick and have headaches arid stomach aches and a lot of psychosomatic symptoms.

“Some kids even talk about suicide. They are really negative about themselves or the world.”

Barrett says parents should be alert for behaviour that is aberrant for their child, as everyone has different levels of emotional reactivity.

Emo culture. to which the Victorian schoolgirls belonged, has made it cool to he sad and negative, Barrett says, and has coincided with an increase in self-harm among teenagers.

Barrett, the mother of a 17-year-old boy, advises parents to stay in touch with their children by participating in their activities and inviting their friends over.

“Under supervision, allow parties or dinner parties in your house,” she says. “Encourage your kids to have human relationships, not just with computers. Kids who have social difficulties tend to escape into their virtual reality space and the more they do that, the worse their social skills become.”

Parents should also try to “just listen” to their daughters. “If they don’t want to talk to you, try to get them to go and talk to someone else, even if it’s Kids Helpline or a teacher.

“Or if parents find their kids have written a letter or something on the internet, saying  ‘I don’t want to be here any more’ I would straight away take them to professional help. They may be bluffing but what if they’re not.”” 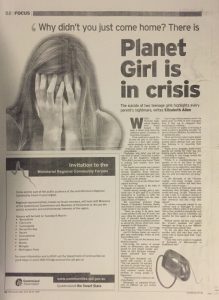 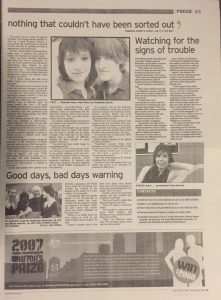