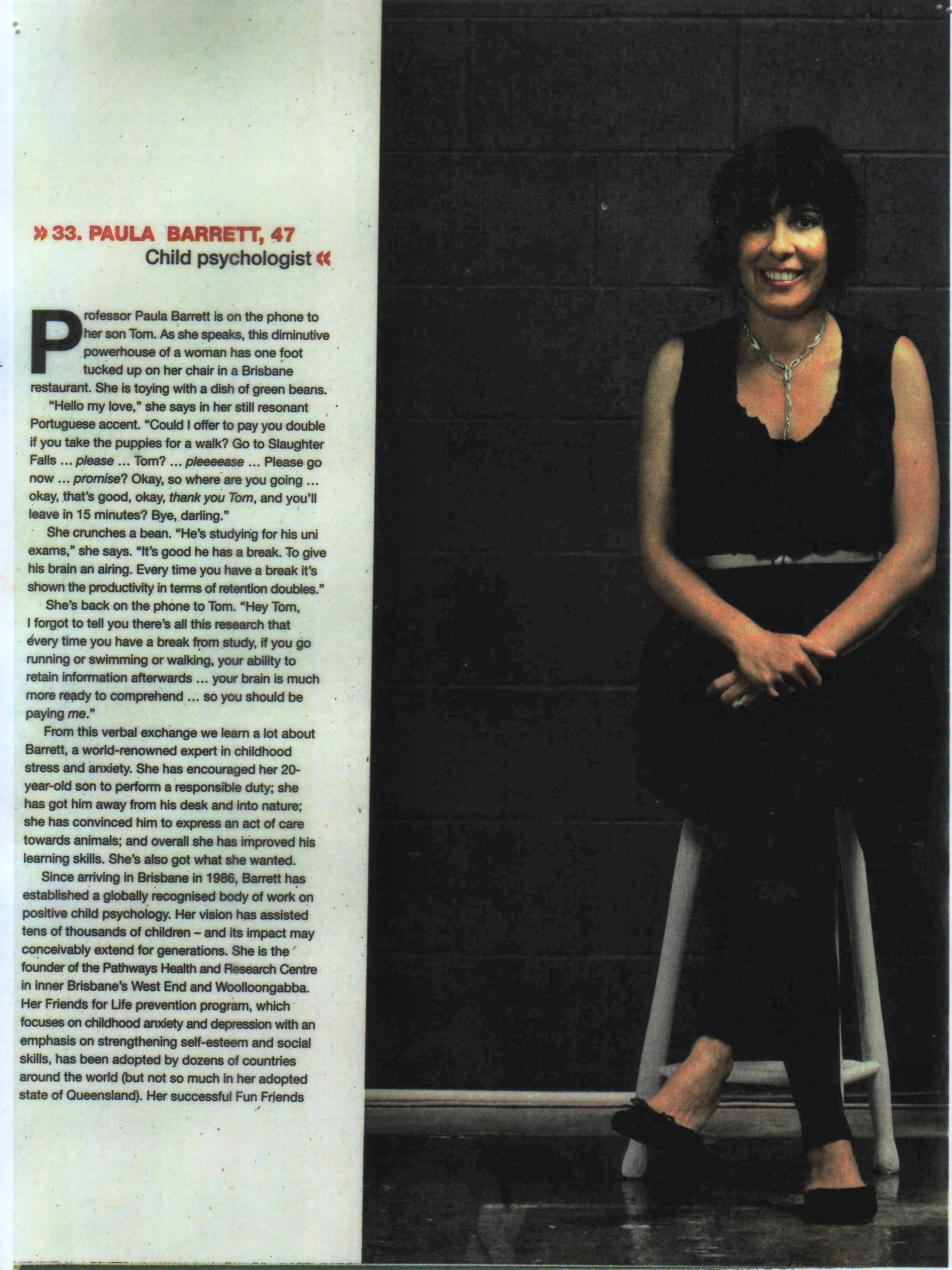 This is an extract from QWeekend magazine and it is about getting to know a little more about Dr Paula Barrett and the idea behind her programs.

“Professor Paula Barrett is on the phone to her son Tom. As she speaks, this diminutive powerhouse of a woman has one foot tucked up on her chair in a Brisbane restaurant. She is toying with a dish of green beans.

“Hello my love,” she says in her still resonant Portuguese accent. “Could I offer to pay you double if you take the puppies for a walk? Go to Slaughter Falls … please … Tom? … pleeeease … Please go now … promise? Okay, so where are you going … okay, that’s good, okay, thank you Tom, and you’ll leave in 15 minutes? Bye, darling.”

She crunches a bean. “He’s studying for his uni exams,” she says. “It’s good he has a break. To give his brain an airing. Every time you have a break it’s shown the productivity in terms of retention doubles.”

She’s back on the phone to Tom. “Hey Tom, I forgot to tell you there’s all this research that every time you have a break from study, if you go running or swimming or walking, your ability to retain information afterwards … your brain is much more ready to comprehend … so you should be paying me.”

From this verbal exchange we learn a lot about Barrett, a world-renowned expert in childhood stress and anxiety. She has encouraged her 20-year-old son to perform a responsible duty; she has got him away from his desk and into nature; she has convinced him to express an act of care towards animals; and overall she has improved his learning skills. She’s also got what she wanted.

Since arriving in Brisbane in 1986, Barrett has established a globally recognised body of work on positive child psychology. Her vision has assisted tens of thousands of children – and its impact may conceivably extend for generations. (…) Her Friends for Life prevention program, which focuses on childhood anxiety and depression with an emphasis on strengthening self-esteem and social skills, has been adopted by dozens of countries around the world (but not so much in her adopted state of Queensland). Her successful Fun Friends program is tailored to children aged four to seven, arming them to deal with stress, bullying and the rigours of our modern world.

So how did this peripatetic woman, born in Angola to Portuguese parents and spending much of her early life living in various parts of the world as the daughter of a diplomat, come ashore in Brisbane?

“I finished some studies in Portugal and I wanted to have an adventure before I settled and was stuck in a job,” she says. “I already had a fascination with a guy who lived in Australia called Sam Neill. There was this television series in Portugal at that time that I always loved. Reilly: Ace of Spies. Ohhh, I loved that. I did some research in the library and found out he was from New Zealand but lived in Australia, so there was this fascination. Then there was A Town Called Alice or something like that. I wanted to live in the Outback.”

Instead, she settled in West End and suffered the taunts of a migrant who spoke little English. “I found everything a bit stifling,” she recalls. “It was really hard for me to make it happen for myself professionally. It was tough. But whatever I do I try to do well. I love Brisbane. I love the heat. And it doesn’t matter where you live these days if you want to succeed.

“It is tough for a woman to achieve. But I think I can do anything I want anywhere I am in the world. It would be better elsewhere, the government and grant support, but apart from that I think if people are good at what they do and are genuinely passionate, you will succeed anywhere you are. I can still think the ideas and still make a difference.”

Barrett has won awards – last year she was the state’s Telstra Business Woman of the Year – and attracted nominations for Australian of the Year. But her core passion is not so much business as the mental wellbeing of children. “When I started working with children I realised there were a lot who didn’t need to become adults with difficulties and anxiety and depression,” she says. “Youth suicide is such a big problem in Australia, particularly Queensland. God, we can treat these kids so easily. It’s not true there aren’t any anxious kids – there are many more anxious kids than aggressive kids. It’s one in five for anxiety; it’s one in ten for aggression.

“No-one helps these kids, so they’re going to grow up being really talented in some area but without the ability to bounce back when there are obstacles. There’s so much we can do for these kids in terms of prevention, in terms of educational strategies we can give them when they’re really young. And the younger they are, the better. It becomes part of the second language in their brain and they know how to deal with everything that is adverse in a competent and brave way.

“Child psychology and child development has always lagged behind adult issues. Even now the adult mental health budget is more than 80 per cent of the [total] budget. It’s all about fixing big problems rather than preventing them from happening in the first place. With children, it is better to prevent, and equip them for the rest of their lives.”

Barrett’s work has been endorsed by the World Health Organisation and is being taught across the globe, from Canada to Japan to Europe. She travels the world speaking at conferences. And her daughter Ana, 27, has just had her first child, adding “grandmother” to Barrett’s impressive resume.

It’s mid-afternoon. The dogs have been walked and Tom has taken in some fresh air. The beans have been consumed. (…) It’s been a good, productive day – and for the indefatigable Barrett, it’s by no means over. “ 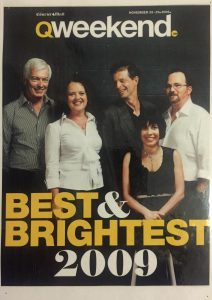 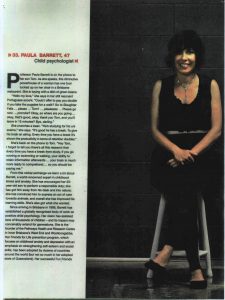 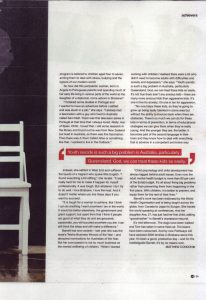