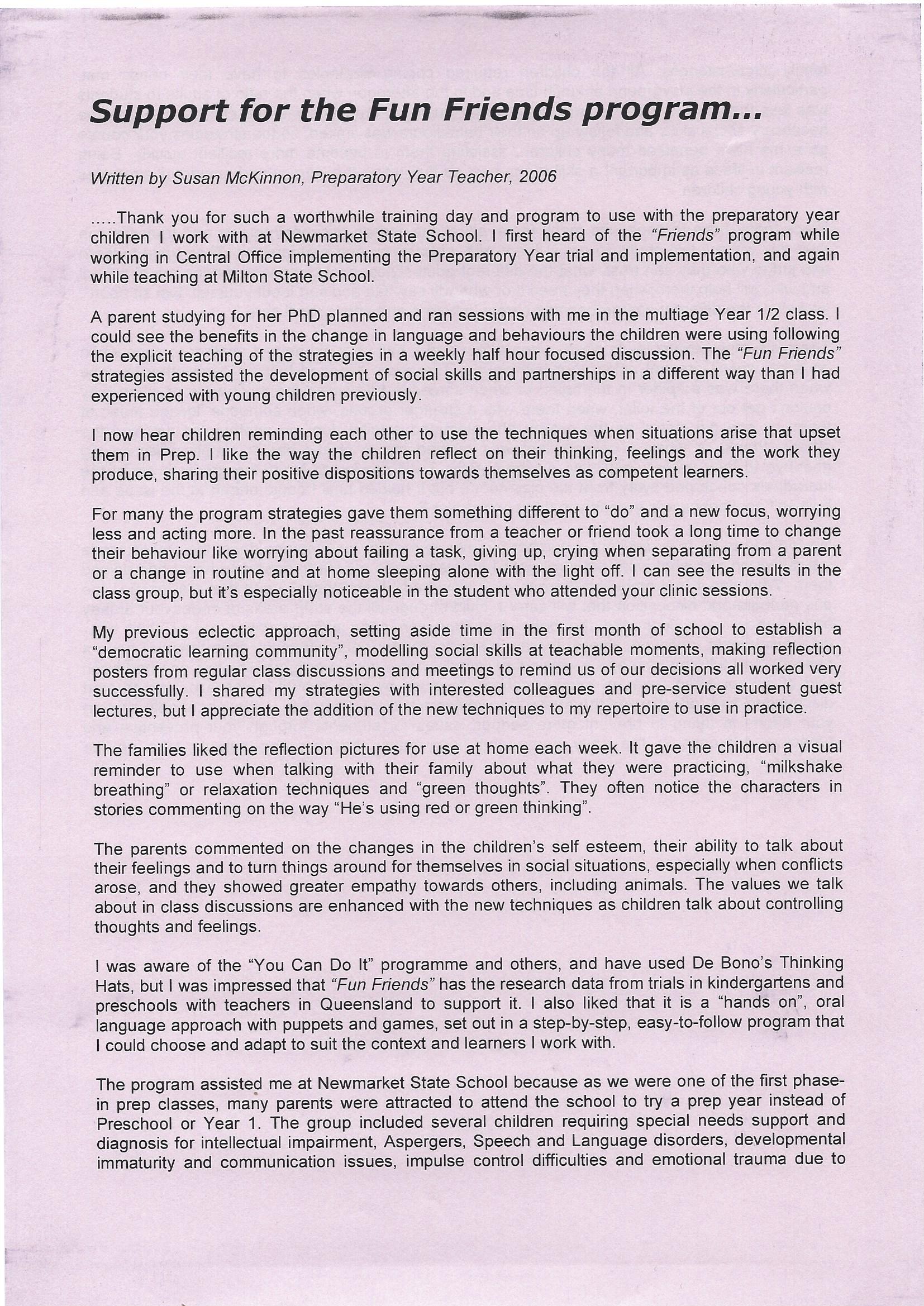 Support for the Fun Friends Program

…..Thank you for such a worthwhile training day and program to use with the preparatory year children I work with at Newmarket State School. I first heard of the “Friends” program while working in Central Office implementing the Preparatory Year trial and implementation, and again while teaching at Milton State School.

A parent studying for her PhD planned and ran sessions with me in the multiage Year 1/2 class. I could see the benefits in the change in language and behaviours the children were using following the explicit teaching of the strategies in a weekly half hour focused discussion. The “Fun Friends” strategies assisted the development of social skills and partnerships in a different way than I had experienced with young children previously.

I now hear children reminding each other to use the techniques when situations arise that upset them in Prep. I like the way the children reflect on their thinking, feelings and the work they produce, sharing their positive dispositions towards themselves as competent learners.

For many the program strategies gave them something different to “do” and a new focus, worrying less and acting more. In the past reassurance from a teacher or friend took a long time to change their behaviour like worrying about failing a task, giving up, crying when separating from a parent or a change in routine and at home sleeping alone with the light off. I can see the results in the class group, but it’s especially noticeable in the student who attended your clinic sessions.

My previous eclectic approach, setting aside time in the first month of school to establish a “democratic learning community”, modelling social skills at teachable moments, making reflection posters from regular class discussions and meetings to remind us of our decisions all worked very successfully. I shared my strategies with interested colleagues and pre-service student guest lectures, but I appreciate the addition of the new techniques to my repertoire to use in practice.

The families liked the reflection pictures for use at home each week. It gave the children a visual reminder to use when talking with their family about what they were practicing, “milkshake breathing” or relaxation techniques and “green thoughts”. They often notice the characters in stories commenting on the way “He’s using red or green thinking”.
The parents commented on the changes in the children’s self esteem, their ability to talk about their feelings and to turn things around for themselves in social situations, especially when conflicts arose, and they showed greater empathy towards others, including animals. The values we talk about in class discussions are enhanced with the new techniques as children talk about controlling thoughts and feelings.

I was aware of the “You Can Do It” programme and others, and have used De Bono’s Thinking Hats, but I was impressed that “Fun Friends” has the research data from trials in kindergartens and preschools with teachers in Queensland to support it. I also liked that it is a “hands on”, oral language approach with puppets and games, set out in a step-by-step, easy-to-follow program that I could choose and adapt to suit the context and learners I work with.

The program assisted me at Newmarket State School because as we were one of the first phase-in prep classes, many parents were attracted to attend the school to try a prep year instead of Preschool or Year 1. The group included several children requiring special needs support and diagnosis for intellectual impairment, Aspergers, Speech and Language disorders, developmental immaturity and communication issues, impulse control difficulties and emotional trauma due to family circumstances. All the children required coping strategies to have their needs met, particularly in the playground at lunch time and in the afternoon when the ratio of adults to students was less than two to 25. The time available for quality interactions with the children to teach the necessary social skills and follow up on their behaviours was limited, so the strategies your course gave me have benefited many children, assisting them to become more resilient quickly. Being resilient in life is as important a skill to me now as facilitating the literacy and numeracy strategies with young children.

Preps today have to cope with many fears, situations, losses, disappointments and transitions in their day without two adults to assist them with interactions and partnerships. They have to learn and judge who they can trust, what the different adult-styles, expectations and rules are at school and who will help them when they need it or who will say “Go and sort it out yourself, just sit apart”, as well as the different age groups and carers in before and after school care.

There are many examples to share when a four and a half year old helped another to cope when an adult wasn’t present using your techniques. The preps reported helping each other to cope when there was a spider in the toilet, or when someone had soiled the toilet walls or when they couldn’t get out of the toilet, when there was a stranger around, when someone ‘looked mean at them’ as one girl stated as the reason she slammed a toilet door on another girl catching the other’s cheek, or when a collage item was pushed into a child’s ear or simply when saying goodbye to their parent each day. As the teacher I still needed to leave the group to assist the individuals concerned away from the classroom, but it helped until I could attend to the issue and built self confidence and empathy in those who helped.

Having had to be fairly resilient a number of times in my life, as everyone does, the course made me reflect on just what were the strategies I had learned in my life to cope and how I had gained them. Who was it had modelled them to me? How had I learnt them? I see that resilience is the one attribute and disposition that will carry a child through all the other areas of endeavour. If they have a positive outlook and the belief that they can cope with whatever comes their way, disappointments, rejection, illness, losses in sports, family, pets, whatever, then they will have a peaceful and fulfilling time and a network of friends. I only wish a program like this one had been part of school when I was in primary school, because by high school it was a bit late to start discovering and reflecting on the strategies, unlearning previous habits. I wholeheartedly support your efforts in trying to prevent more serious issues for students through your prevention and proactive approach in the early years and hope many teachers and parents take up the opportunity. “ 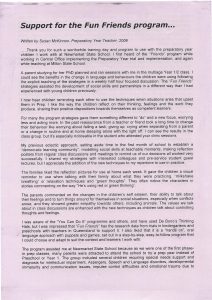 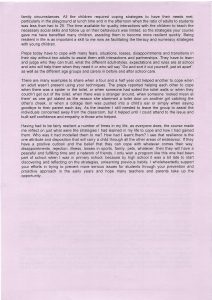